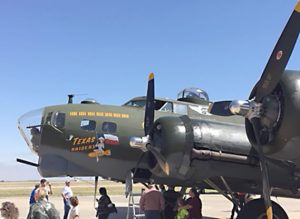 You know there are decisions that you make and opportunities that you miss out on that stay with you for a while? I am hoping that I can correct one of those in the coming years. More on that missed opportunity further down in this blog – this is intended to be a remembrance of our veterans.

The B-17 was the Army Air Corps workhorse during the European campaign in WWII. A wing-span of 104 feet, a maximum speed of 287 mph, a ceiling of more than 35,000 feet, and an armament of 10-11 .50 caliber machine guns, it helped bring the European theater to a quicker close. The Allies’ strategy was to bomb German manufacturing plants to the point they could not produce replacement parts, including ball bearings.

My grandfather, H.B. Riza, was a former B-17 driver. I was so happy to get to know another driver, Mr. Joe Robinson, before he passed. I won’t tell my favorite Mr. Robinson story here; but if you ever ask me, and if Mrs. Robinson isn’t around, I will tell you. These men were part of a generation that this country may never see again, and that is a shame.

My uncle Brad Riza, USAF Col. (Ret), simply known to my children as “The Colonel,” gave me a book years ago titled, Combat Crew, written by John Comer. Comer was a Flight Engineer/Top turret gunner on a B-17 assigned to the 381st Bomb Group out of Ridgewell. Mr. Comer flew out of there in 1943, my grandfather flew out of Ridgewell in 1944. Depending on the time of the war, there were two or three squadrons assigned to the base, meaning possibly 75 planes were stationed there.

I have seen a restored version before, at the Pima Air & Space Museum (Tucson, Ariz.). This was a trip that included H.B., The Colonel, myself and my son Bobby. When H.B. saw the plane he got up out of the wheelchair I was pushing him in, and he just stared at it. The walls were covered in maps and he began to walk among them and tell stories about things only he knew. Others in the hanger began to pay attention because they realized he had been there, and he was telling history lessons that aren’t in textbooks. When he got to the plane, he ran his hands down the fuselage, and you could tell he was thinking of the crew he had led during 35 missions over “the continent” as they referred to Europe. He told stories about his plane being shot up and how they managed to get back to England, except the three times they were shot down.

A couple of years ago in Amarillo, I saw the Texas Raider, one of the last operational B-17s in existence, painted in the markings of the 381st Bomb Group. I stood outside while they fired up each of the four engines to taxi out and take off. I can only imagine the sounds if you were a civilian in Ridgewell when 75 of these planes were preparing to fly. Towards the later years of the war, it was not uncommon for the 8th Air Force to put 1,000 planes in a mission, as some have said, almost blocking out the sun.

The decision I regret was not riding in the Texas Raider that day. I missed that opportunity and hope that I can make up for it later. I am very aware that the plane, and the men that flew it, will all be gone in the near future. Thank God for both the plane and the crews that allow us to live as we do today.